Start a Wiki
The Alpha Tab gets unlocked once you join a Clan.

The Foreverwing, the white Bewilderbeast, Drago's Bewilderbeast, the Green Death, (Violet Death), the Shellfire, and the Screaming Death are the Alphas you can battle against. The Alpha comes for a limited time and will appear on your Clan's Island.

A new Alpha can be defeated each day. The Alpha's difficulty depends on the previously defeated Alphas. The more Alphas the clan defeat, the more difficult they will be. The green bar on the Alpha tells its health and the amount of damage done by the members of the clan. The list of best players shows how well you and your clan mates have performed.

You can fight the Alpha using

, but you gain 1 back every 4 hours. Each battle against an Alpha will grant the player 10

. Based on how much damage was dealt the player can accumulate Bonus

. If the team manages to defeat the Alpha within the allowed time, the Bonus

earned by each player will be added to his

progression. If it escapes, only the 10

earned with each battle, will remain. 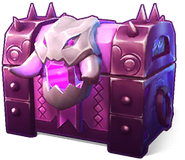 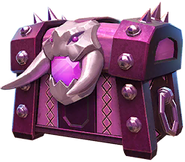 Add a photo to this gallery

Alpha Chests will give better rewards the more you open them, using the Alpha Keys

you have gained. They can contain Fish

for Maeve's Buffalord. Each player has his individual Chest. The Chest's level is determined by the average star difficulty of the last 5 Alpha battles in which you have participated. The chest level will always be rounded up.

All chests contain a

The Level 1 Alpha chest does not contain sheep

Chest Contents, Based on Chest level

Retrieved from "https://dragons-titan-uprising.fandom.com/wiki/Alpha?oldid=10012"
Community content is available under CC-BY-SA unless otherwise noted.