This dragon inflicts 30% increased damage for 5 turns.
Barf & Belch is a Legendary,

"I hate smart Dragons! That’s why I love you"
― Tuffnut

Barf & Belch: the living example that two heads may not be better than one. Like their Riders Ruffnut & Tuffnut Thorston, they are quarrelsome, silly, and far more intelligent than they let on. The Twins first met Barf & Belch in a cloud of gas in the Berk Arena during training - before the Dragon War had ended. Unbeknownst to both duos, there would begin a long-lasting relationship of painful humor. Since that fateful meeting it has been nearly impossible to determine which pair is more destructive: the six-thousand pound, sixty-six foot long explosive Dragon, or the five-foot-nine, blonde-haired maniacal set of Twins.

Despite their brutal humor, frequent pranking, and the never-ending trail of chaos, this foursome has proven essential in protecting Berk. Don’t tell them we said so, but they are well respected and valued members of the Berk Dragon Academy. Barf & Belch have saved the day more times than the Twins can count (but that’s not saying much), and have made the Zippleback the most sought-after species among young Trainers addicted to chaos and carnage.

in order to get them. 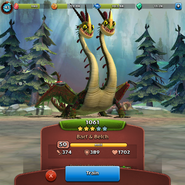