All other allies gain 25% bonus health.

This dragon gains 45% bonus health.
Beachcomber is an Epic,

"He's a big softie if you don’t mess with his food. Like me."
― Gobber

This supremely lazy seaside regular spends all his time scouring the shoreline for his favorite snack: sandstone. Once Beachcomber finds a patch of the divine delicacy, he camps at the spot until all the sandstone is scarfed down. He buries himself under a thin layer of sand during long naps to avoid contact or confrontation with any other creatures - it's far too exhausting. He can remain munching on a single deposit of sandstone for weeks at a time, only moving on when his supply has run dry. When another Boulder class Dragon gets too close to his precious pickings, the true strength of this massive beast is revealed spectacularly. Beachcomber will put on a convincing show of force: stomping and roaring, sending sand and spit flying in every direction. 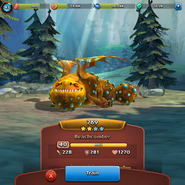