This dragon recovers 55% health of 180% damage to target foe.

All Allies inflict 25% increased damage for 4 turns.
Bombwelter is an Epic,

"This dragon's no fun. He only blows up bad guys, and for justice! What's a girl gotta do to get some explosions?"
― Ruffnut

Bombwelter earns his name from his ability to bombard foes with the above-average strength of his fiery rings, which hit with explosive force. In battle, he specifically targets fault-lines in the earth to trigger earthquakes and inflict even more damage!

Despite his destructive nature, Bombwelter is warm, welcoming, and well-disposed. His explosive attitude on the battlefield doesn't follow him home, where he enjoys the company of Vikings and dragons alike. His bright hide is only overshadowed by his sunny disposition. 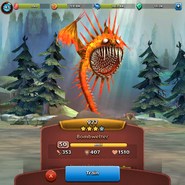