All allies recover 35% health over 7 turns.

All other allies generate 25% spirit for 3 turns.
Unknown Ability (3)
Brute-Wurst is a Rare,

"He loves my yak noodle soup as much as Gothi!"
― Gobber

Brute-Wurst quickly became a favorite of Gobber, who named him after his favorite breakfast food — yak-wurst. Spicy and pungent in his own right, Brute-Wurst is a lovable goofball on Berk and a valued ally in battle.

Although he doesn’t get credit for it, Brute-Wurst is an intelligent dragon. His playful antics on Berk get him a reputation as a clown, but anyone who has seen him in combat know he’s quick-witted and keen — mostly because he wants to finish fighting and get back to eating Gobber’s homemade chow! 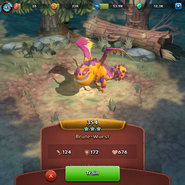 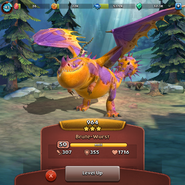