This dragon gains counterattack with 190% damage for 4 turns.
Charsoul is an Epic,

"A bright one, Charsoul. In mind, spirit, and appearance."
― Valka

Like the coal the smolders before bursting aflame, Charsoul is a clever dragon who takes the time to consider his options before leaping into action. As such, all trainers would do well to not disturb Charsoul's thinking and then trust this particular Nightmare's judgement!

Like most Nightmares, Charsoul has a bit of attitude to him — although it's somewhat deserved, in this case. Charsoul's prowess as warrior and cunning in battle has earned him a commanding status among not just his fellow Nightmares, but also across many dragon breeds. 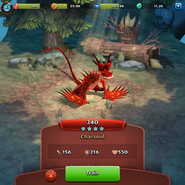