This dragon gains 35% bonus health.
Cloudjumper is a Legendary,

"This wasn't a vicious beast, but an intelligent, gentle creature, whose soul reflected my own."
― Valka

After two decades together, Valka and Cloudjumper share a relationship unrivaled by other Academy Dragons and their Trainers. Their bond runs so deep that the two can communicate without words - with an unspoken understanding that goes far beyond Dragon and Trainer, Cloudjumper and Valka are family. Their relationship had an inauspicious start: Cloudjumper kidnapped Valka from Berk during the Dragon wars, after determining she meant no harm. Due to this conflicted beginning, Valka knew she could convince neither Berk nor Stoick that Dragons were peaceful creatures. Instead, she chose to rescue Dragons with her newfound friend - the massive Stormcutter that had taken her from home.

Years later, after Hiccup had made peace with the Dragons and taught Berk the ways of Dragon Riding, Cloudjumper and Valka would return to Berk. They took on prominent roles in the now Dragon-allied community: Valka, a fountain of wisdom to learning Trainers; Cloudjumper, a judicious role model for the young Dragons. 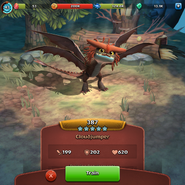 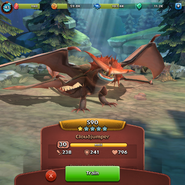