All other allies generate +28% spirit for 5 turns.

This dragon gains invisibility for 5 turns.
Dreadfall Toothless is a Legendary,

"Here I am, ungodly beast! Fearless Finn Hofferson! I've been waiting ten years for this moment. Come and get me if you dare!"
― Finn Hofferson

When frost begins to glaze the first fallen leaves, and shadows spread their batlike wings across the Barbaric Archipelago, the season of mists known as Dreadfall begins. The sun retreats south with the songbirds as the darkling sky fills with Aurvandil’s Fire. With the shadows comes an incursion of night creatures borne by a spirit of subtle menace. In this season, the veil between this world and the next is at its thinnest, and the dead are said to rise and walk the earth again.

And what night creature has a more ominous reputation than the Dreadfall Night Fury? He is the light in the shadows, illuminated from within by bioluminescent algae. A death’s head adorns his face like a wound revealing the skull beneath the scales. He is one with the dark, flitting through the crack between worlds. The insidious fluttering of his wings writhes its way into the nightmares of any Viking child that hears it, drowning out the sound of their screams as they squirm in restless slumber...

...Or at least this is how Toothless feels when he puts on his Dreadfall face paint. To anyone watching, The Dreadfall Night Fury looks suspiciously like Toothless making faces in a mirror.

Dreadfall Toothless is an Event Dragon and can be added to your roster by gaining enough Trust Point during the annual event period (See Holiday Events). Don't worry if you don't manage to get enough! Your

Dreadfall Toothless can also be obtained from the special draft.

for Dreadfall Toothless are purchasable in packs after the event. 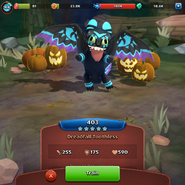 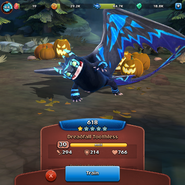 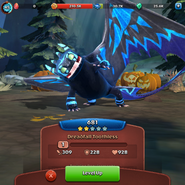 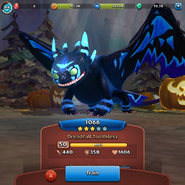 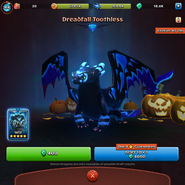