"Shows clear signs of relationship issues with his father, classic case. Him and Snotlout should meet."
― Tuffnut

A dragon apart from the rest of his reclusive breed, Driftcleaver becomes easily bored in the remote wilderness and would rather roost in civilization. This presents a big problem for Berk’s wooden rooftops!

Driftcleaver is a prime example of what many Vikings have come to think of as a big city dragon” — loud, assertive, and often in other people’s space. As such, he tends to get along best with other strident dragons, such as Monstrous Nightmares and Rumblehorns.

Egg or through the Basic and Premium Dragon Drafts. 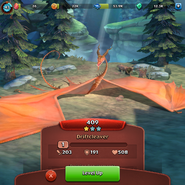