This dragon recovers 35% health.
Unknown Ability (3)
The Elder Dramillion is an Uncommon,

"It knows! It knows I'm an Ingerman!"
―Fishlegs

The Elder Dramillions, however, will never forget. That makes them hard to train. In fact, it could be argued that it makes them impossible to train. They just simply will never allow a human to tell them what to do. But it also makes them fearsome fighters, in particular when their children are in danger. The key with Dramillion taming is not to think of it as taming. Think of it as an alliance, and all will go well. As long as they are happy fighting for a righteous cause, they'll add their intense firepower to help that cause. You just have to make sure that whatever you ask them to fight for is a just cause. 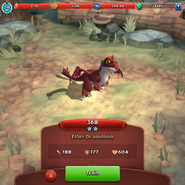 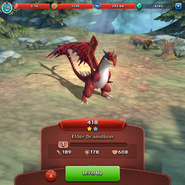 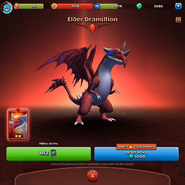