All allies recover 30% health over 6 turns.

This dragon cleanses negative effects.
Fireshrike is an Epic,

Fireshrike is the self-appointed den mother to her flock’s hatchlings. Although not a parent herself, this Nadder nanny fiercely defends the young dragons in her charge and visits her wrath upon any who endanger them!

Instinctually protective and alert, Fireshrike remains eternally vigilant in her nanny duties.And this maternal streak now extends to her human friends. She dotes on full-grown Vikings as if they were newborn Nadders! 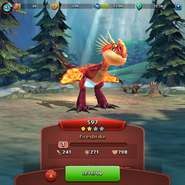 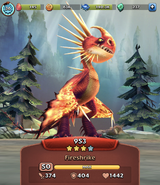