All allies inflict 40% increased damage vs

dragons for 4 turns.
Freedom Hookfang is a Legendary,

"If I can’t fly Hookfang, I don’t want to fly any Dragon."
― Snotlout

On Berk, the tradition of shooting fireworks on the fourth day of the seventh moon has a long heritage, though most Hooligans are ignorant of the reason for the celebration. Hookfang knows this heritage, because he listens.

Gothi knows the true story, and she tells it on occasion. When she does, Hookfang watches the marks she draws in the dust with her staff, with enrapt attention, and this is what she says:

Centuries ago, a terrible Dragon called Merciless led the Dragons of the Archipelago in an attempt to commit genocide against Vikings. He considered them, with good reason, to be the enslavers of Dragon-kind. Hiccup Horrendous Haddock the First banished Merciless from the Viking world with the use of a strange amulet called the Dragon Jewel, which contained the seed of a deadly disease that had the power to exterminate the Dragon population if released.

Although Hiccup the First won the battle, he resolved tensions with the remaining Dragons by treating them as humanity’s equals. He bore a mark on his brow called the ‘Dragonmark’ as a promise to never do harm to Dragons again.

Over subsequent generations, Viking leaders forgot Hiccup the First’s promise and gradually began to treat Dragons with increasing contempt, until the time of Grimbeard the Ghastly, who refused the Dragonmark outright, and enslaved Dragonkind and humans alike to build his dystopian city on ‘The Island of Tomorrow’. The Dragons rebelled against this enslavement with the help of Grimbeard the Ghastly’s youngest son, Hiccup Horrendous Haddock the Second, in what was known as the ‘Dragon Rebellion’. The details of this terrible war are another story, but suffice it to say that when it was finally won, Hooligans have been marking the day of its final victory with a fireworks display. The custom remains, although the reason for it is lost to the annals of time.

Hookfang listens to this story with increasing excitement, knowing that the pretty lights are coming.

He’s loved them since he was a hatchling, watching adult Monstrous Nightmares going to flame in the sky above the nest he was germinating in. As a result of this early conditioning, he has always associated fireworks with a cozy feeling of belonging.

When he grew big enough to take to the sky, he discovered a new sense of freedom and empowerment in learning that he could become one of those lights himself, and bring that tremendous feeling to others.

Freedom Hookfang is an Event Dragon and can be added to your roster by gaining enough Trust Point during the annual event period (See Holiday Events). Don't worry if you don't manage to get enough! Your

Freedom Hookfang can also be obtained from the special draft.

for Freedom Hookfang are purchasable in packs after the event. 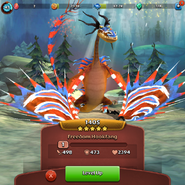