All allies gain strong hit for 1 turns.
Unknown Ability (3)
Frostfang is a Rare,

"He’s loved me ever since I fixed his toothache, big softie."
― Gobber

Whereas most Snow Wraiths exhibit an icy demeanor, Frostfang is a friendly and ebullient dragon — particularly during the Snoggletog season. He even joins the Terrible Terrors in singing off-key holiday carols from the village rooftops!

In the entire history of dragon training, Frostfang is the only Snow Wraith to ever be described as cute.” What’s more, he’s developed a special friendship with his favorite hotheaded Monstrous Nightmare, Hookfang!

Egg or through the Basic and Premium Dragon Drafts. 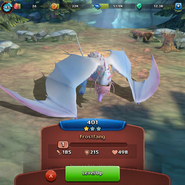