This dragon recovers 45% health of 120% damage to target foe.

"A reminder that there are victims on both side to every war."
― Valka

Guarded Whispers are extremely cautious of humans, and burrow deep underground to avoid them in the wild, having been hunted severely during the dragon Wars. These days, trappers are their biggest threat, coveting them for their indestructible teeth, which make great weapons.

Due to extensive hunting and trapping, Guarded Whispers are aptly named. They avoid Vikings when possible, and even when raised on Berk are hesitant to trust even the gentlest of souls. 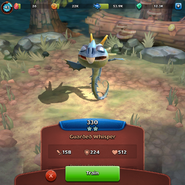