All allies gain 25% bonus health.
Unknown Ability (3)
The Gutsy Boltstamper is an Uncommon,

"I mean, sure, it's cool, but not as cool as Hooky."
― Snotlout, visibly awed by the Boltstamper

When sheer power isn't enough to dominate foes, a resolute mindset can make or break the battle. Fortunately, the Gutsy Boltstamper has both. Its reinforced hide protects an even tougher personality, allowing this hybrid to roam the Woodlands with confidence and dispatch its attackers with ease.

Self-assurance and power, understandably, bring a touch of over-confidence. As a result, Gutsy Boltstampers often charge into battle fearlessly — sometimes foolishly — and must then rely on their more measured allies to bail them out of trouble. 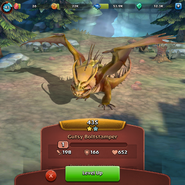