All allies gain strong hit for 1 turns.
Gyllentalon is an Epic,

"The rooftop suddenly burst into flames, and from it armored dragons descended, burning the hall to the ground. I was the only one to escape."
― Stoick the Vast

The Gyllentalon is one of the few Dragons in the Archipelago that had a cult following. Due to the uniqueness of its golden coloration, a folk tale arose among the aboriginal people of Odin’s Grassland about this singular dragon.

According to the tale, When the goddess Freya was grieving the disappearance of her husband, Od, she wept tears of gold that fell onto an unwary lizard sunning itself on the rocks below. The tears transformed the hapless Thunderclaw into the Gyllentalon, blessed with the grief of the Goddess of Love. The Aboriginal People of Odin’s Grassland brought offerings of food to Gyllentalon’s lair, in the hopes that their missing loved ones would return through the blessings of the Goddess.

The people who held this belief wandered north long ago, but the Gyllentalon remains. It may be hard to prove that it will bring the luck of the Goddess, but there is only one way to find out. Even without this blessing, however, the Gyllentalon’s gifts of valor make it a formidable addition to any fighting team. 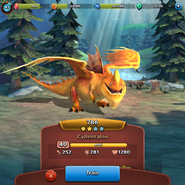