All allies gain counterattack with 185% damage for 4 turns.

All allies inflict +22% increased damage vs

dragons for 4 turns.
Hailfate is an Epic,

"I can practically see my gorgeous self in his scales."
― Ruffnut

Hailfate feels most at home in the frigid valleys of the Tundra, where he carves deep banks into the snow while gliding over the glaciers. He has discovered that he can jab his long tail through the thick ice along the coast to hunt sea slugs. Vikings were quick to adopt this tactic for fishing, but their tools took much longer compared to the Razorwhip’s sharp and powerful tail.

Although Hailfate has warmed up to Vikings, he seems to hold a grudge against the Razorwhips native to the Barrens. Fishlegs suspects it was frequent territory disputes that lead to the species being so widespread. 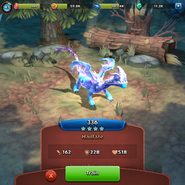 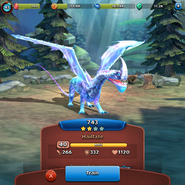