All allies gain strong hit for 1 turns.
Unknown Ability (3)
Hidera is a Rare,

"Hiccup was right. It’s hard to fight what we can’t see."
― Gobber

The chief reason Hidera is considered an amazing fighter involves an elaborate defense mechanism that’s led to many misleading stories. If Hidera is cornered and feels the tide of battle turning against her, she will allow her assailant to strike her neck. Although she absorbs most of the power of this strike with careful body movements, she will use her color-changing ability to give the appearance that the wound was fatal—even to the extent of beheading. The assailant, sure of their victory, will then drop their guard, at which point Hidera will remove the illusion and redouble her attack. This deceit is so convincing that many superstitious Vikings have assumed that Hidera can regrow her head from a severed stump. Although impossible, many still believe this myth and speak as though it were true. Whether Hidera is aware of this or not, she does benefit from the fearsome reputation this story engenders. Most Dragon hunters who come across Hidera will turn back in fear, leaving her to go about her business. No defense is as effective as a fearsome reputation. 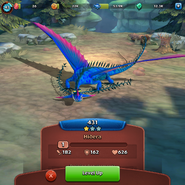