This dragon generates 30% spirit for 6 turns.
Hookfang is a Legendary,

Fangster. Hooky. Overgrown Fire-Pit. Many colorful names for a very colorful Dragon: Hookfang. For a five-thousand pound, self-engulfing, fire-spewing Dragon, Hookfang is often more cool-headed than his Rider and friend, Snotlout Jorgenson. As with most of the first five Trainers' Dragons, Hookfang was captured and used in the Academy to teach the gang how to survive - and eventually destroy - their kind. Hookfang was the final challenge: it was he whom Hiccup was destined to kill to prove himself a true Berkian. Thankfully that time never came, and Hookfang found himself with Snotlout - a challenge in his own right! It wasn't long before the two were inseparable, though neither will admit it openly.

Over the years Hookfang has proven to be powerful and extremely resourceful, having discovered several ways to ignite Snotlout's bottom (much to everyone's amusement). It is Hookfang's kerosene gel which is used to ignite Hiccup's flaming sword - Inferno. 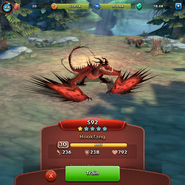