"Hey, uh… Fishlegs? When was the last time you saw a boulder run uphill?"
― Hiccup

In the frozen mountains in the North East of the Archipelago, nestled somewhere between Valka’s Mountain and Glacier Island, there is a small mountain range that is the ancestral home of the Ice-Tongue Quaken. This region is not often visited by the Vikings of Berk; partially because it is quite remote, and partially because it is dangerously prone to avalanches.

Less well known is that these avalanches are neither geological nor meteorological in origin. They are caused by the nocturnal activities of Ice-Tongue Quakens. Anyone witnessing this spectacle is sure to freeze in fear. Following this will be a more literal freezing, as snow dislodged from the side of the mountain by the crashing bodies of Ice-Tongue Quakens surges down upon them in a tidal wave of frost.

As fatal as these events might prove to the casual viewer, the truth of this activity is both playful and strange. Ice-Tongue Quakens take turns smashing their bodies into the deep snow that accumulates on the top of mountains while other Ice-Tongue Quakens wait for the resulting avalanche. They get their kicks riding the wave of snow to the bottom of the mountain.

They are completely unconcerned with any tiny humans that might get frozen into ice blocks in the meantime. They are having too much fun to notice or care. 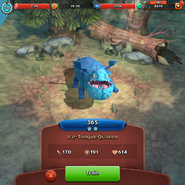 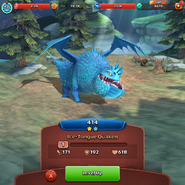 When stroked.
Community content is available under CC-BY-SA unless otherwise noted.
Advertisement