All allies take ???% decreased damage for ??? turns.
Unknown Ability (3)
The Magmic Eruptodon is an Uncommon,

"He’s in a Feeding Frenzy. Nothing will stop him."
― Queen Mala

Magmic Eruptodons have a proclivity for Uranium. They will dig to great lengths to sink its teeth into this delicious and dangerous rock. Their powerful forepaws help them cleave through solid basalt to get to the juicy bits in the core of the earth. Magmic Eruptodon have a unique organ in their sinuses that will click in the presence of this unstable element, which they seek out hungrily and gobble up with relish.

As a result of this unusual diet, Magmic Eruptodons have a particularly intense flame with a strange side effect. People who are burned by it rarely survive, but when they do, they often waste away from bone disease afterwards. Among the Defenders of the Wing, it is considered a particularly divine honour to meet your death in this way, ensuring immortality in the afterlife in Asgard.

These claims should be taken with a grain of salt, however, as it seems likely they were invented as consolation for those afflicted with a painful wasting disease.

Whatever the truth, it is wise to be careful not to annoy a Magmic Eruptodon. They are much better to have as friends than as enemies.

It can be hatched from an Uncommon 2 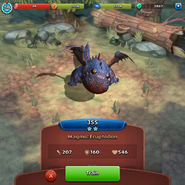 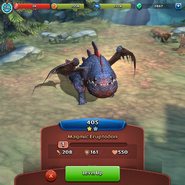 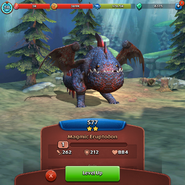 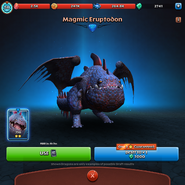