Rings of Fire with central Fusillade

This dragon recovers 55% health of 140% damage to target foe.

This dragon gains counterattack with 225% damage for 4 turns.

All allies gain strong hit for 1 turns.
Mob-Clobber is a Rare,

"Mob-Clobber speaks with his fists. We understand each other. Well... his claws. Whatever."
― Snotlout

Mob-Clobber is the first of the Hushbogles to truly show compassion towards Vikings. Hiccup, Fishlegs, and the latest graduates from the dragon Academy made this breakthrough when deciding to train Mob-Clobber at night, giving this infrared-eyed dragon the advantage during their moonlit drills!

Mob-Clobber isn't exactly civilized, but he seems to be aware that his violence is to be saved for enemies...or Snotlout. His attitude represents a huge leap forward in hybrid breeding, where dragons long seen as outsiders can now find a new home side-by-side with Vikings.

It can only be obtained by breeding: 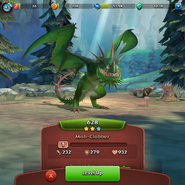