"Gassiest dragon on Berk. In a good way."
― Hiccup

Muck & Tumble is a bit of an anomaly among Zipplebacks in that both heads produce thick, green gas, but struggle to produce sparks. Fortunately, the resultant smokescreen blinds foes and allows Muck & Tumble to sneak past them!

Muck & Tumble have a habit of hiding at the first sign of trouble because they can't ignite their own gas clouds, so they aren't the bravest of dragons. But they are some of the friendliest, often partnering with more incendiary breeds like Fireworms and Monstrous Nightmares to add some more flame to the flammable gas! 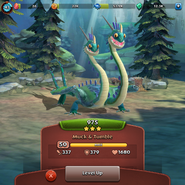