This dragon gains invisibility for 3 turns.

All other allies inflict 50% increased damage for 3 turns.
Myrkva the Immoral is a Legendary,

"You're alright. I'm sorry this happened to you."
―Fishlegs

Myrkva the Immoral was granted his abominable appellation from the Loyal Order of Ingermans in recognition of the intense brutality of this Dragon during the Dramillion campaigns. Myrkva was the largest and most ferocious Dramillion ever known. He alone was chiefly responsible for the Loyal Order of Ingermans fading into the obscurity of history. Although other notable Dramillions added significantly to the resistance effort, Myrkva's unique abilities were by far the most powerful tool in the effort of Dramillions to save themselves from genocidal extinction.

Mirkva led his troops in guerilla strikes against the Ingermans, stalking a troupe sometimes for weeks waiting for the moment when their defenses would drop, creating the perfect opportunity for an ambush. Once the enemy had been lulled into a false sense of security, deep in Dramillion territory, Myrkva the Immoral would use his color changing powers to make himself invisible and sneak into the center of camp while his companions waited out of sight. A sudden burst of flame would indicate the destruction of the Ingerman weapon stores, drawing the enemy to the center of camp. While they importantly tried to put the fires out, the Dramillions would encircle them with a wall of flames.

This was followed by a desperate and bloody battle, made all the worse for the Dragon hunters by their lack of weaponry. It was rare that any one of them would survive to tell the tale, but we know some of them must have, or the legends of Myrkva the Immoral would never have been told.

It can be obtained through the Premium Dragon Draft. 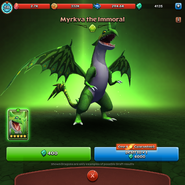