All allies recover 30% health over 3 turns.

All allies inflict 30% increased damage vs

dragons for 4 turns.
Ormsliki is an Epic,

"Of course! The Dramillion are capable of multiple attacks, which makes them the perfect training Dragon. And with their tails manacles, they can't fly away"
―Fishlegs

In the hard times, when the Dramillions were on the run from the campaigns subjected upon them by the Loyal Order of Ingermans, it was all too common for Dramillion communities to lose cherished members of their community. All animals feel pain and loss, particularly those who organize in groups, and Dramillions are no different.

During those times, it was community leaders like Ormsliki who kept the pack together. Ormsliki would provide sustenance and care to the smaller members of its pack, replenishing their fire when it ran out of charge, licking the wounds of the injured, and nursing the incapacitated back to health. Ormsliki's presence alone was enough to fire up the hearts of her friends and get them back in the battle. Not because Dramillions like to fight, far from it, but the elders knew that their very survival was on the line, and if they wanted to see another day, they would fight. Not all Dragons are fighters, nor should they be. Nature thrives on diversity and specialization. Like a pelican rending its own breast to feed its young, Ormsliki gives her flame to the smaller ones, that they may fight in her place. But what feeds the Ormsliki, you might ask? Always, with her, it is the memory of those who are missing; those who didn't make it; that steadies her resolve. Her determination is borne of an intense desire to see her children, and her children's children, thriving in a world that accepts them, and leaves them to live their lives in peace. 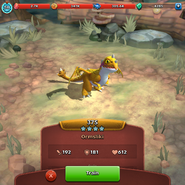 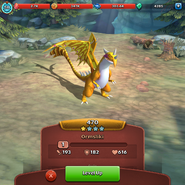 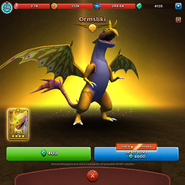