All foes lose accuracy for turns.

This dragon recovers 36% health over 3 turns.
Pufferfinch is an Epic,

"You worked up a healthy appetite trying to kill us earlier, so eat. EAT!"
― Snotlout

The Pufferfinch is personally responsible for the deforestation of entire islands by its voracious appetite for shrubbery. Wherever the Pufferfinch turns up, a grassland is born, as any tree poking its head above the grass will be immediately chewed into submission. An entire ecosystem of birds, reptiles, and other animals follow in its wake, adapting to open barrens where closed woodlands would not have been as hospitable to them. This in itself has saved at least twenty known species from extinction.

The Pufferfinch is terrified of grass fires: a trait that makes it self-conscious about using its powerful flame attacks on the one hand, but also leads it to stamping out any other Dragon’s flames before they can do any real damage.

It can be hatched from an Epic 3-4

Egg or obtained through the Premium Dragon Draft. 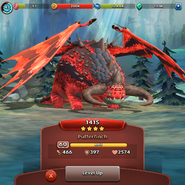