This dragon inflicts 25% increased damage for 4 turns.
Unknown Ability (3)
Slash-Dasher is a Rare,

"That’s no Dragon - it’s an armory with an attitude problem."
― Gobber

Both Dragons and Vikings are quick to get out of the way of Slash-Dasher and her stinging temper. This unruly and often boorish beast refuses to cooperate with anyone besides her Trainer or Fishlegs. The secret to winning her over is by sharpening her tail - if she lets you that close. Few have seen this secret side to Slash-Dasher. In private, she will curl up like a great ironclad kitten while her tail is being filed.

While her tantrums can be bothersome on Berk, it makes her a robust ally in battle. Her snappy attitude at home feels downright friendly once you’ve seen her take on a Hunter ship.

Egg, or through the Basic or Premium Dragon Draft. 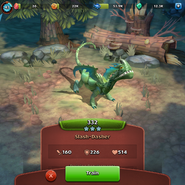 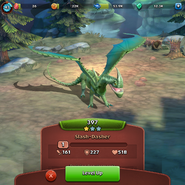