Target foe takes 200% damage over 5 turns and amplifies other damage over time by 28%.
Unknown Ability (3)
The Stalker Changewing is an Uncommon,

"So what you’re tellin' me is that our village is about to be under siege by wild Dragons we can’t see?"
― Stoick the Vast

When winter frost begins to etch its glittering graffiti across the Archipelago, sensitive animals fly south to warmer climes. When the Stalker Changewing flocks begin to feel the chill setting in, they congregate in uncountable numbers, making their way south at the pace of their slowest members. Part of the reason their numbers are ‘uncountable’ is the sheer multitudes in which they make their migrations. The larger part, however, is the difficulty of detecting them as they go. An entire throng could be present in your village for weeks without detection, only making their presence known by their shimmering eyes—or when an unsuspecting Viking treads on their toes, triggering an involuntary squeal.

As dangerous as it sounds to have a pack of invisible dragons hanging out in your town, the fear is unfounded since Changewing attacks are extremely rare during migration. Stalker Changewings prefer to remain clandestine and will only unleash the power of their ferocity under the direst of circumstances. 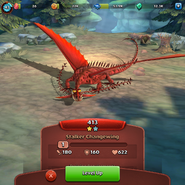