No Dragon Left Behind

"I don’t know what I would do without Stormfly."
― Astrid

An iconic pair second only to Hiccup and Toothless, Astrid and Stormfly show what years of rigorous training, bonding, and battling can achieve. Astrid may be one of Berk’s best Trainers, but Stormfly is undoubtedly one of our most intelligent Dragons; together they make a powerful team that will stop at nothing to come out on top. Be it Dragon Races, trick contests, or aerial combat against the worst the Barbaric Archipelago has to offer - Astrid and Stormfly aren’t to be underestimated. Being a Nadder, Stormfly has some of the hottest fire found in Dragons; however, she prefers to rely on non-lethal use of her high precision spine shots to trap or intimidate foes into submission.

Underneath the grueling training regiments, both Stormfly and Astrid have a soft side (which they keep well-guarded). Stormfly and Toothless have always had a friendly but competitive relationship - when kept on a proper diet, she can even hold her own in a race against him! Over the years they have become quite close with one-another, often play-fighting over Hiccup’s prosthetic leg during games of "fetch the limb".

in order to get her. 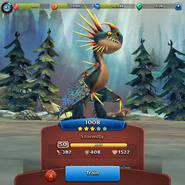