All foes lose beneficial effects.
The Tectonic Thorium is a Legendary,

"That's because the world is actually round. The Sun is round. Moon is round. Stars are round. Even though they're small and stupid."
― Tuffnut

In the far western corner of the Barbaric Archipelago lies the island of Vanaheim. This island houses the legendary boneyard of Dragons, and is taboo for any human to set foot on.

On the North end of this island is a cave which is not easy to find. If you do make your way past the Sentinels, through the groves of dense foliage, and down through layers of recessed stone, you may find yourself beholding the petroglyphs of the Ancients.

The story they tell is strange beyond measure.

Firstly, they tell of an earth that is round like a ball of yarn, despite the fact that everyone knows the world is flat.. The glyphs talk of the history of this sphere, and how it was born from the core of the sun. At first it was all fire and molten rock. A nuclear core of magmic fire. Then, born from the night sky above, a meteor of ice crashed into the flaming ball, cooling a section and hardening it into dense, cold stone. On this island of rock, the first rains fell, and from them came the first life. That lift changed over time, growing into an army of proto-Eruptodons. They spread in droves, feeding hungrily on the flaming surface of the earth until it was cool and hard and other forms of life appeared. The pictures on the wall of this cave must certainly be myth. Everyone knows that the Earth was made from the decomposing body of the Giant Ymir, and that the sun is merely the flaming shield of the goddess Sunna, carried across the sky in her chariot each day as she evades the wolf, Skoll, the sun eater. We know it must be merely the mad scrawlings of some ancient people. It is safe, then, to assume that the proto-Eruptodons, had they ever existed, must certainly be gone.

The Tectonic Thorium might challenge that notion. He is the direct descendent of the last proto-Eruptodon. He is larger and more powerful than any of the other Eruptodon known to Berk. He lives in the core of the deep rifts in the Earth’s crust that form the plates of stone mountains are made from. He bathes in the ocean of fire found beneath this stone, and sleeps in a bed of magma every night. When he dreams, and writhes in his dreams, it is said that the earthquakes that come from it are huge enough to rival those Loki makes in his own wrigglings. We all Fear the Tectonic Thorium, though we know he is good. Befriend him, and your enemies will know that fear.

It can be obtained through the Premium Dragon Draft. 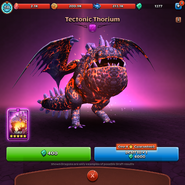