"It’s no wonder Stoick took such a liking to this breed."
― Gobber

Tectonic Thunderdrums earn their name from their uncanny ability to cause landslides and earthquakes with their roars. The roars echo off the nearby mountains, causing vibrations that trigger epic changes in the landscape.

At least Tectonic Thunderdrums are consistent. They solve all of their problems by yelling. Territorial disputes, food rights, and nesting areas are all resolved by furious shouting matches! 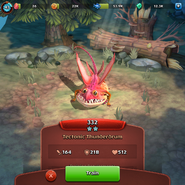