All foes cannot be healed for 5 turns.

All allies recover 30% health over 5 turns.
The Antiquarian Accumulator is a Legendary,

"Instead of chasing down an imaginary Dragon, maybe we should figure out how to get home?"
―Hiccup

This Dragon is so reclusive that most of what we know about the Antiquarian Accumulator comes from a single source. Miranda the Magniloquent, a revered goldsmith of the Bog-Burglar tribe, claims to have spent several months in the presence of this enigmatic creature, and although her tale was largely regarded as the ramblings of a mad woman, we now know that other Boneknappers exist, and so perhaps her legacy can be vindicated.

Miranda claims that for years leading up to her abduction she felt as though she were being watched by some unseen presence. Her insistence that someone was following her was so well known, that when she ultimately vanished, nobody looked for her, assuming she had run off on her own to prove them wrong.

Miranda had been on her way home from the tavern when bony paws grabbed her from behind, carrying her up into the sky. She passed out from terror immediately.

She woke up in a makeshift cage forged from the ribcage of a long extinct species of Dragon. The cave it was in was adorned with all manner of ancient and broken treasures, seemingly collected from far and foreign lands. Her captor revealed himself as a peculiar and previously unknown variety of Boneknapper.

Overtime, it became obvious to Miranda that the reason for her abduction had something to do with her profession. The Antiquarian Accumulator chose her for his menagerie due to its obsession with gold and other ornamentation. As the months wore on, she found herself gradually occupied in adorning her captor with gold rings, jewels, a monocle, and other antiques from his collection. At first, this service was done out of fear, but gradually Miranda came to feel sympathy for her captor. Gradually, this sympathy turned into trust. One day she awoke to find that the Antiquarian Accumulator had set out a chair for her. She fastened it onto his back and the two of them took to the sky. They went on short flights at first, but as time wore on, they went farther and farther from the Dragon’s remote island. It was on one of these excursions that Miranda finally made her escape. She dropped from the Antiquarian Accumulator’s back during a freak thunderstorm, and was lost. She hid among some kelp to avoid the Dragon’s detection, then swam for hours before succumbing to exhaustion.

She awoke on the shore of a settled island and gradually made it back home. When she finally got there, she found that 70% of the town’s population had been wiped out by the Scourge of Odin.

She’s still not sure why she was targeted by this enigmatic Dragon, and hasn’t seen him since, but if you see him, she hopes you will thank him on her behalf.

It can be obtained through the Premium Draft  and Elite Dragon Draft Box. 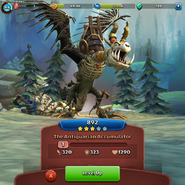