This dragon gains 30% dodge against all attacks for 5 turns.
The Light Fury is a Legendary,

This Light Fury is also the canon mate of Toothless, as seen in How To Train Your Dragon: The Hidden World.

"Did she just turn...invisible?"
― Astrid

Since Vikings used to think the Night Fury was the "unholy offspring of lightning and death itself", they'd surely consider the Light Fury a sunnier version of that — if only they could see her! The Light Fury moves as fast as Toothless and shares his ability to blend into the sky — even during daylight hours. With her white coloration, the Light Fury hides seamlessly in clouds, sea fog, and distant horizons. Although skittish and skeptical of humans, the Light Fury also shares Toothless' deep sense of empathy and will always wield her plasma blasts to defend any in need.

in order to get her. 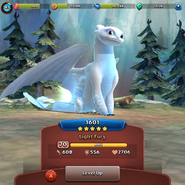