All other allies recover ??? health over ??? turns.
The New Protector is a Rare,

"We should hook it up with Meatlug. You know, she pukes lava. He might be into that kind of thing."
― Tuffnut

The Protector of the Island of the Defenders of the Wing laid only one egg in its life. In order for that egg to be properly incubated, it was necessary to enlist the help of the Riders of Berk to implant the egg deep in the tunnels beneath the active volcano that dominates the landscape of that island. Without a constant bath of lava, the egg ran the risk of petrifying before hatching, which would have been disastrous to the entire community of the Caldera Cay.

The laying of an egg is the first sign that an aging Eruptodon is reaching the end of its tenure. Soon after the New Protector hatched from his egg, his Mother began her decline. When the volcano threatened the village of the Defenders and the New Protector outperformed his mother in saving the day, She knew it was time for retirement.

A moment for celebration, the Protector prepared for her final flight towards Vanaheim to retire with honor. The New Protector took up the mantle of responsibility, and immediately got started eating the lava that would otherwise obliterate the village. He took to this task as though born to it and who can blame him? If your only task in life is to eat that which you find delicious, it is difficult to complain. 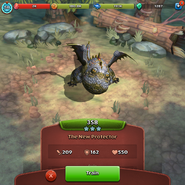 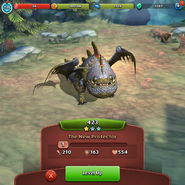 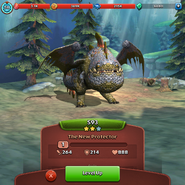 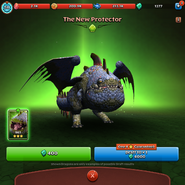