All other allies generate +25% spirit for 4 turns.
Toothless is a Legendary,

"The unholy offspring of lightning and death itself"
― Hiccup, reading the Book of Dragons

Once the most feared Dragon, Toothless (the only known Night Fury), was the first to be trained. Years later Toothless would become the Alpha of ALL Berkian Dragons.Highly intelligent, fiercely loyal, and ferociously loving, Toothless is more like family than friend.

Once comfortable Toothless is intensely playful, behaving more like a critter than a killer. His intelligence and empathy also appears to allow a degree of creativity, as shown when he mimicked Hiccup drawing. He even got upset when his "art" was stepped on! A dry sense of humor, a big heart, and a winning smile make Toothless and Hiccup mirror images of each other, and they are rarely out of each other’s company.

is given to the player's roster during the tutorial. You must gain 1k in order for him to join your team.

He is also an Event Dragon and can be added to your roster by gaining enough Trust Point during the event period. Don't worry if you don't manage to get enough! Your

for Toothless are purchasable in packs and obtainable in Exploration. 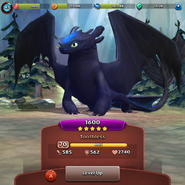