All Allies inflict 33% increased damage for 3 turns.
Unknown Ability (3)
Torch is a Rare,

Torch has quite the history with the Dragon Riders, who temporarily adopted as hatchling before returning him to his very upset mother. Later, Torch saved all of Berk by extinguishing a forest fire. For a short time, Torch even had his own rider, Hroar — who turned out to be an Outcast spy that Astrid promptly dropped into a fish barrel!

True to his breed, Torch has a bit of a hot head. This can be seen easily in his mostly-playful rivalry with Toothless. The two share a complicated relationship, but ultimately get along. And Torch’s early and continued friendship with Vikings has led him to feel quite at home in Berk.

It can be hatched from a Rare

, or through the Basic/Premium Dragon Draft. 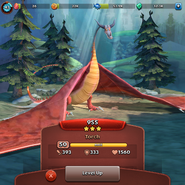