Underwood Changewings are present all over the Barbaric Archipelago, but you’d never know it. Their uncanny ability to change the texture and color of their scales makes them incredibly hard to spot, even when they are right next to you.

Changewings are essentially peaceful Dragons who prefer hiding to frontal confrontation, however, it would be a terrible mistake to assume they are pushovers.

Their camouflaging abilities make these Dragons formidable opponents. They choose their battles with care, attacking only when they are sure their enemy is alone and vulnerable.

Whether it takes a day or a month, an offender can be sure that the revenge of the Changewings will come when least expected. Your best defense against these creatures is to leave them be. If you leave their food source and eggs alone, they will pass by without incident, but woe to those who stand in their way.

It can be hatched from a Common 1 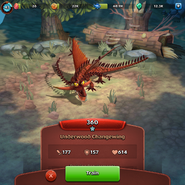 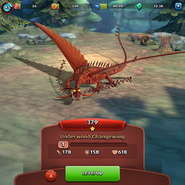