This dragon cleanses negative effects.
The Volcanic Vethorm is an Epic,

"There are certain corners of the animal kingdom where humans mustn’t tread ."
― Mala

Opportunities for changing the world come very seldom, but when they do, the one who hesitates is lost.

The world can change with a flash of lightning.

The Volcanic Vethorm is living proof that this is true.

Her mother lived at the Caldera of the Yellow Stone, but as the area became overpopulated with Eruptodons, she realized that her life path would take her far from home. She travelled for weeks in search of a new volcano she could call home, but sadly, was not able to find a suitable location that wasn’t already home to other Eruptodons. Starving and alone, the Vulcanic Vethorm’s mother rested at the crest of a lightning tortured peak, thinking she would die of hunger. Like any Eruptodon facing death, she prepared to lay the egg that would replace her, despairing that it would not find its way into a bed of lava soon enough for it to incubate before turning to stone. With her last breath, she covered the egg with lava, a desperate act that would not ensure the egg’s survival had it not been for one thing:

Due to the Vingthor’s mother’s diet of molten hematite, the Volcanic Vethorm’s bed of stone contained a high concentration of iron. The result of this is that the egg essentially acted as a lightning rod. The peculiar atmospheric conditions on top of the mountain brought a constant electric charge. Lightning flashed, hitting the egg 15 times a minute and keeping it as hot and cozy as it would have been in the bed of lava usually used to incubate Eruptodon eggs. A few days later, the Volcanic Vethorm was born in a shower of sparks, ready to take on the world. 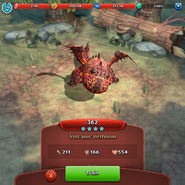 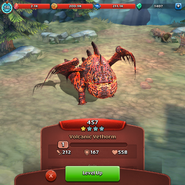 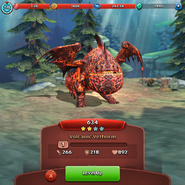 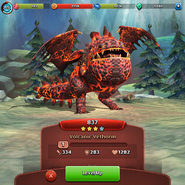 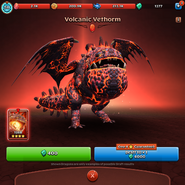